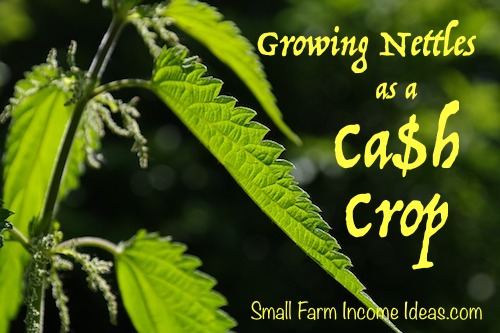 When we moved to our new farm two years ago, we discovered growing nettles in several patches across the property. I’d heard how wonderful nettles were, so with a pair of surgical gloves and a quest for adventure, I set about harvesting my first nettle crop.

That first harvest turned me into a lifelong fan of nettles. They have to be steamed, cooked or dried before eating, but food made with nettles tastes so amazing. The leaves aren’t the only part of the plant that is useable, though, and that’s part of what makes growing nettles for profit such a sure winner.

Nettles are harvested throughout the growing season.  In the spring and early summer months, you can harvest nettle greens several times.  Heading into late summer, the seeds are an important medicinal crop with a good demand.  In fall, the roots are dug and sold as yet another–and the most profitable–medicinal part of this wonderful plant. Here’s Skeeter, a renowned permaculture instructor, telling us why he likes growing nettles as a cash crop:

As a bonus, you can create cordage from nettle plants, though the market for that is not as established.  For a sustainable small farm, however, it’s an interesting additional product to grow.

Nettles are easily propagated from root cuttings, so if you have access to a wild patch, this would be the most cost effective way to get started. If you can’t find a local patch, several online seed companies sell stinging nettle seeds – Baker Creek has 800 seeds for $2. You can start them indoors or broadcast seed a prepared area.

Nettles grow well in nutrient rich, moist soils. They tolerate some shade well – my three patches are all under the light shade of cottonwoods, along the creek bank. This makes them ideal for utilizing areas you might not otherwise be able to grow a crop in. They do spread, so take care to plant them where you won’t mind the spreading. The ability to spread is also related to their ability to withstand weed pressure, yet another selling point for growing nettles.

Most people are not likely to buy green nettles since they require further processing to be edible.  You may have a small market this way at local farmer’s markets or your own farm stand, but for the most part, you’ll need to dry the nettles and sell them as an herb.  Some marketing angles for dried nettle leaves include:

Nettle seeds are somewhat easier, lacking the stinging properties of the leaves.  You’ll still need to dry nettle seeds to make them shelf stable.  Seeds can be sold as planting seeds or for medicinal purposes.  I’ve seen recipes for a nettle salt, where ground seeds are included in a salt mixture for seasoning.  There are many options for seeds as well.

See my article “9 Ways to Sell Herbs” for more ideas.

Nettle root is going to be the biggest cash crop, but it also requires the biggest time investment.  Roots are harvested from two-year old plants, so the turnaround time is longer.  Additionally, the actual harvesting is going to be more labor intensive and requires a bit more skill – care must be taken not to kill the patch when harvesting roots.

Like the rest, nettle roots must be dried before being sold.  You can sell whole dried roots, or chop them into smaller pieces, or even grind them yourself to sell in powdered form.  State law may be a factor here; in Washington even drying herbs requires a license, so look into your local laws before you begin processing your harvest.  You may be able to create a market for pet products, if licensing is prohibitive for human grade herbs in your state.

A perusal of prices on Etsy showed an average of:

Another interesting thing I saw while researching was powdered nettle seed, which sold for a whopping $14 per 1/4 ounce.  Finding unique ways to market can really pump up the price on this less common product, particularly if you’re in an area where you can own the market locally.

You’ll find that growing nettles is incredibly low maintenance.  Plant them in a good location and they’ll pretty much take care of themselves, with no inputs or upkeep from you.  As the video above shows, they also make a low maintenance inclusion in a cultivated garden, fending for themselves against weed competition.

In another video, Skeeter talks about the money he makes selling nettles to local herbalists.  He says he figures he could make his entire living from 2 acres of nettles, selling the four crops: seeds, leaves, roots and fiber.  His numbers are:

He doesn’t say what he gets for seeds, but that he harvests them as medicinals.

According to the Manitoba government website, nettles can yield 17,000 pounds per acre or 400 pounds per 1,000 square feet.  In a 250 square foot patch, a more reasonable small farm amount, you could reasonably expect 100 pounds of greens, or $600 at Skeeter’s price.  Fresh herbs weigh about three times as much as dried, so those 100 pounds would convert to about 33 pounds of dried herbs.  At the $2.61 per ounce selling price found on Etsy for dried nettles, you could potentially turn that 33 pounds into just under $1,400, and that’s just the greens!

Overall, the demand for nettles seems to be good, with a number of marketing avenues.  If you have unused ground, especially in a partial shade area, growing nettles may be an ideal addition to your small farm income.

As an Amazon Associate I earn from qualifying purchases.

This website uses cookies to improve your experience while you navigate through the website. Out of these, the cookies that are categorized as necessary are stored on your browser as they are essential for the working of basic functionalities of the website. We also use third-party cookies that help us analyze and understand how you use this website. These cookies will be stored in your browser only with your consent. You also have the option to opt-out of these cookies. But opting out of some of these cookies may affect your browsing experience.
Necessary Always Enabled
Necessary cookies are absolutely essential for the website to function properly. This category only includes cookies that ensures basic functionalities and security features of the website. These cookies do not store any personal information.
Non-necessary
Any cookies that may not be particularly necessary for the website to function and is used specifically to collect user personal data via analytics, ads, other embedded contents are termed as non-necessary cookies. It is mandatory to procure user consent prior to running these cookies on your website.
SAVE & ACCEPT
%d bloggers like this: