There is something unforgettable about the feel of a rough calf tongue licking you on the hand in its quest for food. Raising bottle calves for profit is as rewarding as it is hard on the heart – bottle babies are impossible not to love.

Beef is second only to chicken in terms of demand in the United States. According to The North American Meat Institute, over 25 billion pounds of beef were produced by American companies in 2013.

With the increasing demand for grass fed beef, it’s getting easier than ever to turn calves into cash, especially if you have pasture land available.

These are the considerations and a cost/profit analysis for the viability of raising bottle calves for profit.

Before getting started, determine your market and how you plan to sell your calves.  You can sell your calves anywhere from weaning up to butcher age at about 14-18 months and you can choose to sell at auction, to an individual, through a butcher “on the hoof,” or as finished retail cuts.  This flexibility makes raising bottle calves for profit something almost any small farmer can approach.

The first option is to sell at weaning, around 4-6 months.  Weaned calves are usually sold at auction where feed lots buy their future butcher animals.  The USDA has a list of cattle slaughter auctions by state.  This is also a great resource to check market prices across the country, just click into a state and then an auction house.  If you have one near you, this is the quickest way to turn calves around, but it’s also the least profitable option.

Another way to sell bottle calves is direct to individuals who are interested in finishing on their own.  If you have no auction available locally or have a unique marketing angle (organic, grass fed, grain free, etc.), this is a way to sell just-weaned calves.  Unless there is something unique about your calves, such as being raised organically, the price in this model is usually based off of recent auction prices.

Wintering over your calves to butchering age is a more costly method, but also a more profitable one, particularly if you can keep costs down by buying bulk feed or raising some of your own.  The market for finished steers is strong and you likely won’t have any trouble finding buyers to take a quarter, half or whole cut of beef.  This is arranged through your butcher who either comes out to kill and pick up the cattle or has a facility you can bring them to.  Your buyers will pay you a set price per pound of live weight and then make arrangements with the butcher for their specific cuts and payment for his services.

Perhaps the most lucrative–and also labor/time intensive–is selling your finished, cut and wrapped beef directly to consumers.  You control the marketing, selling and pricing, which is factored based on your costs to the butcher and the additional costs of raising a calf all the way to butchering age.  If you have a good customer base or access to a farmer’s market, you may find you cannot keep up with demand for this type of beef selling.

Your feed needs depend entirely on your management method.  If you’re only keeping calves until weaning, milk and pasture may be all you need.  You may want to grain them for increased weight gains.  If you’re keeping them until slaughter age, you’ll need to account for winter feed and for grass-fed or grass-finished cattle, that winter hay and milk will be your only feed expenses.

Milk is the main cost for the first 4-6 months.  The suggested amount of milk is wildly varying depending on where you look.  The University of Kentucky says to feed 4-5 quarts daily until weaning at after 30 days (they’re eating a high amount of concentrates at weaning).  An article from Mother Earth News in 1978 says to begin with two quarts, peak at four quarts by eight weeks and drop back down to two quarts at 12 weeks before weaning by week 16.

We did cattle when I was a kid and ours typically stayed at four quarts through four months old.  A study backs up the need for more milk versus the U of K’s smaller amounts.

Total milk consumed. Raising bottle calves with the University of Kentucky’s recommendation will take about 34 gallons of milk, assuming 4.5 quarts per day for 30 days.  Following the Mother Earth News article’s recommendations, the total amount of milk would be close to 77 gallons, more than twice that of U of K.  I think most people will probably fall somewhere in between.

The type of milk you feed will affect the cost dramatically.  We can get raw whole milk at the store for $5/gallon and conventional milk for about $4.50.  Milk replacer costs $70 for a 50# bag and makes 40 gallons of milk ready to feed.  Milk from my own goats costs $3.82 per gallon, including labor.  The following chart lists the cost using University of Kentucky and Mother Earth News’ suggestions by each type of milk.

An alternative to costly milk feeding is a nurse cow.  If you happen upon a retired dairy cow that will nurse others’ calves, she will be worth her weight in gold, costing less to produce the milk than any other method, especially since the calves will be more efficient at “milking” her than a human or machine. 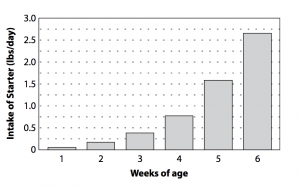 In both bottle feeding scenarios, grain is provided early on and through weaning.  U of K suggests feeding only grain and no hay at all until 8 weeks.  The chart to the left is their chart for 1-6 weeks, which comes to about 40 pounds total.  Hay is begun after calves are eating 5-6 pounds of grain per day, so we’ll extrapolate from that an average of 4 pounds a day in week 7 and 5 pounds a day in week 8.  This comes to a total grain consumption through 8 weeks of about 100 pounds.

The Mother Earth News article recommends about the same amount of grain, working up to 2 pounds per day through week 12 and increasing as needed or removing it completely to begin grass feeding.  Two pounds per day for weeks 8-16 comes to 112 pounds.

The current price of calf starter feed is about $13 for 50 pounds, or $.26 per pound.  At our local feed mill, bulk oats and barley were $.07 per pound and field peas were $.10 per pound.  If you don’t mind the elbow grease, mixing your own can save a lot of money and give you complete control over the ingredients, another potential selling point for buyers.  I mix barley, oats, peas and sunflower seeds for a total cost of $.12 per pound.

To get a calf to weaning, the grain cost comes to $12-$30.  What you spend after that is highly variable dependent on your management and goals.

Where to Buy Bottle Calves

When you’ve found a good source for feed, it’s time to go calf shopping.  This is better done before the season so you can get on the list.  Most calves come from dairies as day old bottle calves, freeing up much needed milk for the dairy.  Call around or ask on Facebook/Craigslist for information on local dairies and to find out their pricing and sales policies.

Cost of buying calves.  Bottle calves from dairies run about $75-$150.  Heifers or beef calves can run several hundred dollars, but our focus here is on the typical dairy bummer calf you can get for about $112 on average.

After your calves wean is when the costs will start to vary the most.  For those of you selling at weaning, your costs are done and it’s time to make the sale.  If you’re planning instead to hold over through a winter, you’ll need to budget for hay.

Past winter, you can choose to grain finish or grass finish.  If pasture is available, it is of course the most economical option.  Like milk, this part of feeding is highly variable; expect to feed anywhere from 5-25 pounds of grain per day if you choose to grain finish.  A typical mix like sweet feed costs $10 for 50 pounds.

Our finished steers would only get grain for about six weeks, but it’s been too long to remember how much we used.  I’d estimate about five pounds a day, so that’s $1/day in grain costs.  At six weeks, the finishing grain cost would be $42.

To sum it all up, in our scenario we’ll buy a day old bottle calf and feed it at the costs from the calculations above:

Pulling data from the most recent Washington weekly combined cattle prices report, we find that:

A quick search yielded about a dozen different farms selling finished beef by hanging weight with a range of $2.90 to $4.25.

Retail beef prices ranged from $8 to $26 per pound, depending on the cut.

To pull all of this together, a calf raised to weaning will cost $156-$557 and will weigh an average of 350 pounds at four months.  At current prices, that calf would bring $350.  Selling in this bracket requires some special marketing or a contract to secure profitable prices.

Sold by the retail cut, the calculations get a bit tougher since the price per pound varies, but most are going to stick around the $9 range.   A dressing weight of 770 will be further reduced to 65% or so, resulting in 500 pounds of retail cuts to sell for a total of $4,500 in sales potential.

There are numerous other cost factors that should be considered here but they are specific to each farmer’s situation.  You will need to count your labor to truly make a profit.  Capital costs, such as fencing and buildings, factor in as a whole in your farm business costs.  Farm insurance, property taxes and incidental costs you’ll accrue along the way should also be considered and accounted for.

Raising bottle calves for profit can most definitely be done, but it requires strict management, a solid plan and a strong market.

As an Amazon Associate I earn from qualifying purchases.

This website uses cookies to improve your experience while you navigate through the website. Out of these, the cookies that are categorized as necessary are stored on your browser as they are essential for the working of basic functionalities of the website. We also use third-party cookies that help us analyze and understand how you use this website. These cookies will be stored in your browser only with your consent. You also have the option to opt-out of these cookies. But opting out of some of these cookies may affect your browsing experience.
Necessary Always Enabled
Necessary cookies are absolutely essential for the website to function properly. This category only includes cookies that ensures basic functionalities and security features of the website. These cookies do not store any personal information.
Non-necessary
Any cookies that may not be particularly necessary for the website to function and is used specifically to collect user personal data via analytics, ads, other embedded contents are termed as non-necessary cookies. It is mandatory to procure user consent prior to running these cookies on your website.
SAVE & ACCEPT
%d bloggers like this: